Winnie Woodpecker is a fictional woodpecker and is the wife or girlfriend of Woody Woodpecker. Her only original theatrical appearences are in 1954's Real Gone Woody & International Woodpecker (as a cameo) and was voiced by June Foray. In The New Woody Woodpecker Show, she is voiced by B. J. Ward. Her neice and nephew are Knothead and Splinter. 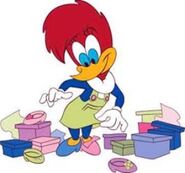 Winnie Woodpecker photo.
Add a photo to this gallery
Appearances

Getting Comfortable (2000) (Cameo as Winnie Celebrates the Christmas Ever)

Retrieved from "https://walterlantz.fandom.com/wiki/Winnie_Woodpecker?oldid=11840"
Community content is available under CC-BY-SA unless otherwise noted.